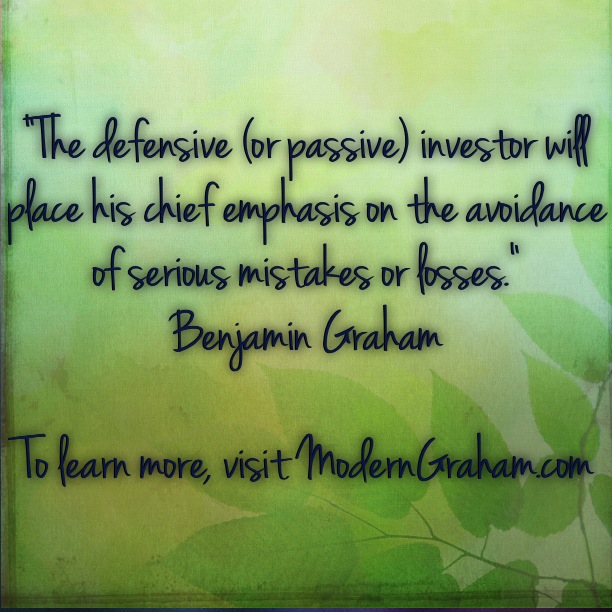 Why Does it Matter?

The ModernGraham approach requires first determining what type of investor you are. Â It is assumed that you are an Intelligent Investor, as Benjamin Graham would put it, or in other words you seek to be patient and factually-based in your investing and has nothing to do with your actual IQ. Â However, Graham took it a step further and divided Intelligent Investors into two types: Defensive and Enterprising. Â I believe that distinction remains very important, and as a result the first step of the ModernGraham approach to investing is to screen companies according to investor type. Â Graham provided a number of criteria to use for stock selection for each investor type (discussed below), but I’ve made it a little easier for you. Â Each month I screen the companies that I’ve reviewed to determine which ones are suitable for Defensive Investors, and which ones are suitable for Enterprising Investors. Â The screen is published in ModernGraham Stocks & Screens.

Benjamin Graham’s definition can be taken directly from the introduction to The Intelligent InvestorÂ (affiliate link):

In the past we have made a basic distinction between two kinds of investors to whom this book was addressed – the “defensive” and the “enterprising.” Â The defensive (or passive) investor will place his chief emphasis on the avoidance of serious mistakes or losses. Â His second aim will be freedom from effort, annoyance, and the need for making frequent decisions. Â The determining trait of the enterprising (or active, or aggressive) investor is his willingness to devote time and care to the selection of securities that are both sound and more attractive than the average. Â Over many decades an enterprising investor of this sort could expect a worthwhile reward for his extra skill and effort, in the form of a better average return than that realized by the passive investor.

In other words, the Defensive Investor is one who is not willing to take the time to do significant research into finding great value opportunities and will instead seek to avoid loss by investing in very stable companies. Â In contrast, the Enterprising Investor is willing to do further research and will work hard to find opportunity. Â Either investor type still seeks to avoid loss, but the primary difference is the amount of time the Enterprising Investor is willing to spend on his investing habits.

Today’s markets are a bit different from how they were in Graham’s day, primarily due to the use of computers. Â Since the digital age arrived, financial institutions have created more and more sophisticated investing techniques, and economists developed the concept of efficient markets. Â This has led to the availability of index funds, ETFs, and similar techniques, which are truly the most passive form of investing. Â I believe that the most defensive investors will seek to invest in index funds because of the ease at which it can be accomplished; however, I also believe that this form of investing does capture the essence of Intelligent Investing, the ability to find opportunity and minimize risk through the analysis of individual companies.

To be considered by the Defensive Investor, a company must pass at least 6 of the following 7 tests.

Note:Â  If the company is a financial or insurance company, test #2 regarding the financial condition is not required; however, the company must pass all six of the remaining tests.

To be considered by the Enterprising Investor, a company must pass at least 4 of the following 5 tests or be suitable for the Defensive Investor.

Note:Â  If the company is a financial or insurance company, tests #1 and #2 regarding the financial condition are not required; however, the company must pass all three of the remaining tests.

Deciding on an Investor Type Strategy for Your Portfolio

Now that you know what each investor type is, and you know the requirements of each investment for the different investor types, you must decide which type you are. Â I am an Enterprising Investor, though I do not shy away from Defensive Investor opportunities when they arise, so I suppose some may argue that I am a blend of the two strategies. Â There is so much in common between the two, especially since companies suitable for Defensive Investors are by default also suitable for Enterprising Investors.

So what kind of Intelligent Investor are you? Â Are you a Defensive Investor or an Enterprising Investor?

4 thoughts on “What Kind of Intelligent Investor Are You?”