Those interested in the stock market often jump on board the latest hot IPO, and it can be very easy for emotions to come into play when IPOs are concerned. Â After all, we all know about the investors who have become millionaires because of early investments in companies like Microsoft and Apple, so it is easy to dream that the same thing will happen to us. Â But it is critical to put IPOs through the same analysis as any other investment opportunity, and analyze the company’s financials to determine its safety of principal and expectations of return on investment. Â This isÂ best done by utilizing a systematic approach to analysis that will provide investors with a sense of how a specific company compares to another company. Â By using theÂ ModernGraham methodÂ one can review a company’s historical accomplishments and determine an intrinsic value that can be compared across industries. Â What follows is a specific look at how Facebook Inc. fares in theÂ ModernGraham valuation model.

Company ProfileÂ (obtained fromÂ Google Finance):Â Facebook, Inc. (Facebook) is engaged in building products to create utility for users, developers, and advertisers. People use Facebook to stay connected with their friends and family, to discover what is going on in the world around them, and to share and express what matters to them to the people they care about. Developers can use the Facebook Platform to build applications and Websites that integrate with Facebook to reach its global network of users and to build personalized and social products. It offers advertisers a combination of reach, relevance, social context and engagement. In September 2013, Mail.Ru Group Limited sold its remaining interest in Facebook Inc. Effective September 25, 2013, Facebook Inc acquired Mobile Technologies, a developer of online applications. In October 2013, Facebook Inc acquired Onavo Inc. Effective January 8, 2014, Facebook Inc acquired Little Eye Software Labs Pvt Ltd. Effective January 13, 2014, Facebook Inc acquired Branch Media Inc. 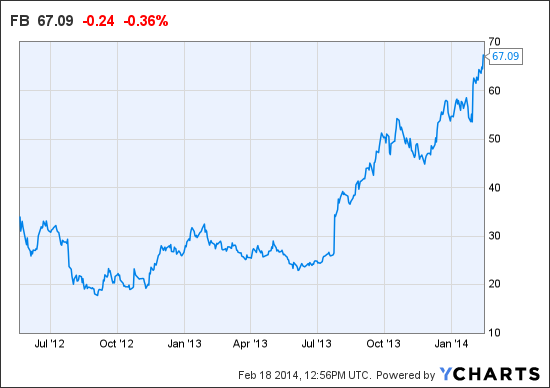 Facebook Inc. is a very intriguing company because of its extremely strong current ratio and low debt overall, but the company does not qualify for the Defensive Investor because of its short history as a publicly traded company. Â The Enterprising Investor is willing to accept a higher level of risk, though, and does not require the same length of time as the Defensive Investor, particularly if earnings data is available from before the IPO. Â With Facebook, the Enterprising Investor’s biggest concern right now is the lack of a dividend payment, which is all too common among young companies, but that is not enough on its own to eliminate the company from contention for investment. Â As a result, Enterprising Investors following the ModernGraham approach based on Benjamin Graham’s methods should feel comfortable proceeding with further research into the company, including a review of other opportunities such as by looking at other companies that pass the ModernGraham requirements. Â From a valuation perspective, the company appears overvalued. Â Its EPSmg (normalized earnings) have grown from $0.02 in 2009 to $0.30 for 2013, which is a very solid level of growth, but the market seems to be pricing the company significantly higher than the earnings currently support. Â The ModernGraham valuation model indicates an estimate of intrinsic value that is well below the market’s current price.

The next part of the analysis is up to individual investors, and requires discussion of the company’s prospects. Â What do you think? Â What value would you put on Facebook Inc. (FB)? Â Where do you see the company going in the future? Â Is there a company you like better? Â Leave a comment on ourÂ Facebook pageÂ or mentionÂ @ModernGrahamÂ on Twitter to discuss.

Disclaimer: Â The author did not hold a position in Facebook Inc. (FB) or any of the other companies listed in this article at the time of publication and had no intention of changing that position within the next 72 hours.