REITs often attract a great deal of investors because of their strong cash flows and dividends, and those investors often overlook other parts of the business, choosing to analyze the company under a different set of criteria than companies in other sectors. Â This can create a problem in that it becomes difficult to compare a REIT to an industrial, which is fine if you use the typical top-down approach to stock selection; however, a top-down approach invites speculation in the fact that you are theorizing which sector will perform well going forward. Â Benjamin Graham taught that we should avoid speculation as much as possible, which is why it is critical to develop a system for analyzing companies that will allow them to be compared across industries. Â This isÂ best done by utilizing a systematic approach to analysis that will provide investors with a sense of how a specific company compares to another investment opportunity. Â By using theÂ ModernGraham methodÂ one can review a company’s historical accomplishments and determine an intrinsic value that can be compared across industries. Â What follows is a specific look at how General Growth Properties fares in theÂ ModernGraham valuation model.

Company ProfileÂ (obtained fromÂ Google Finance):Â General Growth Properties, Inc. is a real estate investment trust (REIT). The Company owns or with joint venture partners 144 regional malls (126 domestic and 18 in Brazil) consists of approximately 135 million square feet. The Company is engaged in ownership, operation, management and selective re-development of its Consolidated Properties and Unconsolidated Properties, which are primarily regional malls. As of December 31, 2012, the Company’s segment was consists of 126 regional malls in the United States and 18 malls in Brazil, eight strip centers totaling 1.6 million square feet, primarily in the Western region of the United States, as well as seven stand-alone office buildings totaling 0.9 million square feet, concentrated in Columbia, Maryland. 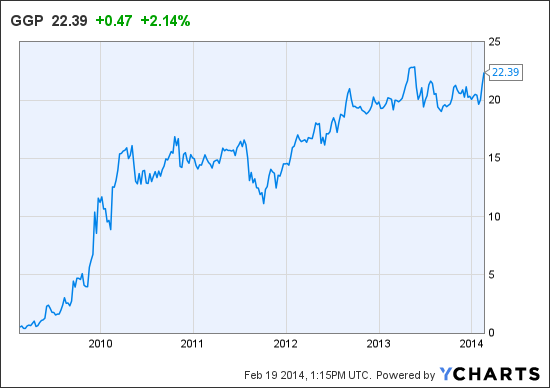 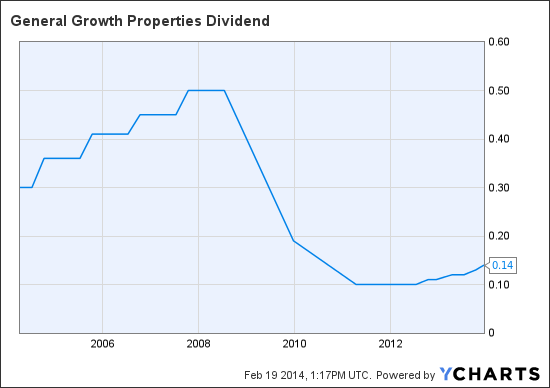 Like most REITs, General Growth Properties does not appear suitable for either the Defensive Investor or the Enterprising Investor. Â The company has not had earnings stability or sufficient growth over the ten year historical period, and the current ratio is too low for the Defensive Investor. Â For the Enterprising Investor, the company lack of earnings stability and growth over the five year period, in addition to the debt level relative to the current assets are the deciding factors. Â Value investors following the ModernGraham approach based on Benjamin Graham’s methods may wish to research over companies that pass these requirements by reviewing ModernGraham Stocks & Screens. Â From a valuation perspective, the company fares very poorly in the ModernGraham valuation model due to the current year’s negative EPSmg (normalized earnings). Â As a result, we are left to assume that any value in the company arises from the balance sheet, and it should be noted that the net current asset value (NCAV) is negative. Â Therefore, due to the poor earnings growth and the negative NCAV, the company appears to be overvalued presently.

The next part of the analysis is up to individual investors, and requires discussion of the company’s prospects. Â What do you think? Â What value would you put on General Growth Properties (GGP)? Â Where do you see the company going in the future? Â Is there a company you like better? Â Leave a comment on ourÂ Facebook pageÂ or mentionÂ @ModernGrahamÂ on Twitter to discuss.

Disclaimer: Â The author did not hold a position in General Growth Properties (GGP) or any of the other companies listed in this article at the time of publication and had no intention of changing that position within the next 72 hours.