Benjamin Graham taught that Intelligent Investors must do a thorough fundamental analysis of investment opportunities to determine their intrinsic value and inherent risk. Â This isÂ best done by utilizing a systematic approach to analysis that will provide investors with a sense of how a specific company compares to another companyÂ or by reviewing theÂ 5 Highest Dividend Yields Among Undervalued Companies for the EnterprisingÂ Investor.Â  By using theÂ ModernGraham methodÂ one can review a company’s historical accomplishments and determine an intrinsic value that can be compared across industries. Â What follows is a specific look at how Vertex Pharmaceuticals (VRTX)Â fares in theÂ ModernGraham valuation model.

Company ProfileÂ (obtained fromÂ Google Finance):Â Vertex Pharmaceuticals Incorporated (Vertex) is in the business of discovering, developing, manufacturing and commercializing small molecule drugs for the treatment of serious diseases. The Companyâ€™s two products are INCIVEK (telaprevir), which is approved for the treatment of patients with genotype 1 hepatitis C virus (HCV), infection, and KALYDECO (ivacaftor), which is approved in the United States for the treatment of patients six years of age and older with cystic fibrosis (CF), who have at least one copy of the G551D mutation in the cystic fibrosis transmembrane conductance regulator (CFTR), gene. The Company has ongoing clinical programs involving drug candidates intended for the treatment of HCV infection, CF, rheumatoid arthritis, influenza and epilepsy. INCIVEK (telaprevir) achieved initial commercial acceptance following its approval in May 2011. It started marketing KALYDECO in the United States in January 2012. 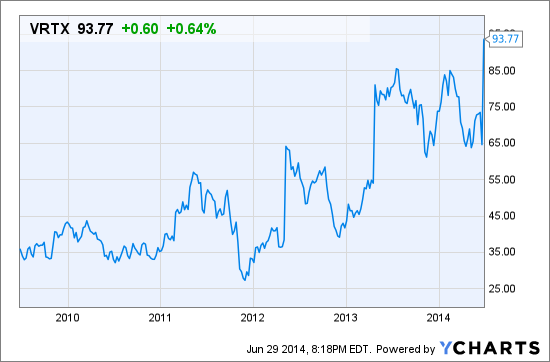 Vertex Pharmaceuticals does not qualify for either the Defensive Investor or the Enterprising Investor. The Defensive Investor has major concerns with the lack of earnings stability over the last ten years, the lack of dividends, the insufficient earnings growth, and the high PEmg and PB ratios. The Enterprising Investor has concerns with the lack of dividend payments and the insufficient earnings stability over the last five years. As a result, value investors following the ModernGraham approach based on Benjamin Grahamâ€™s methods should explore other opportunities such as through a review of ModernGrahamâ€™s valuation of Johnson & Johnson (JNJ) and ModernGrahamâ€™s valuation of Bristol-Myers Squibb (BMY). As for a valuation, the company appears significantly overvalued considering it has not earned a profit in all but one of the last ten years. Such a demonstrated result does not fare well in the ModernGraham valuation model, based on Benjamin Grahamâ€™s valuation formula.

The next part of the analysis is up to individual investors, and requires discussion of the company’s prospects. Â What do you think? Â What value would you put on Vertex Pharmaceuticals (VRTX)? Â Where do you see the company going in the future? Â Is there a company you like better? Â Leave aÂ comment on ourÂ Facebook pageÂ or mentionÂ @ModernGrahamÂ on Twitter to discuss.

Disclaimer: Â The author did not hold a position in Vertex Pharmaceuticals (VRTX)Â orÂ in any other company mentioned in this article at the time of publication and had no intention of changing that position within the next 72 hours. Â Logo taken from wikipedia for the sole purpose of identifying the company; this article is not affiliated with the company in any manner.