Benjamin Graham taught that Intelligent Investors must do a thorough fundamental analysis of investment opportunities to determine their intrinsic value and inherent risk. Â This isÂ best done by utilizing a systematic approach to analysis that will provide investors with a sense of how a specific company compares to another companyÂ or by reviewing theÂ 5 Undervalued Companies for the Defensive Investor.Â Â By using theÂ ModernGraham methodÂ one can review a company’s historical accomplishments and determine an intrinsic value that can be compared across industries. Â What follows is a specific look at how WPX Energy (WPX)Â fares in theÂ ModernGraham valuation model.

Company ProfileÂ (obtained fromÂ Google Finance):Â WPX Energy, Inc. (WPX Energy) is an independent natural gas and oil exploration and production company engaged in the exploitation and development of long-life unconventional properties. The Company focuses on exploiting its natural gas reserve base and related NGLs in the Piceance Basin of the Rocky Mountain region, and on developing its positions in the Bakken Shale oil play in North Dakota and the Marcellus Shale natural gas play in Pennsylvania. Its other areas of domestic operations include the Powder River Basin in Wyoming and the San Juan Basin in the southwestern United States. In addition, it owns a 69% controlling ownership interest in Apco Oil and Gas International, Inc. (Apco), which holds oil and gas concessions in Argentina and Colombia. As of December 31, 2010, it had proved reserves of 4,473 Bcfe, 59% of which were proved developed reserves. Average daily production as of March 31, 2011 was 1,251 MMcfe/d. 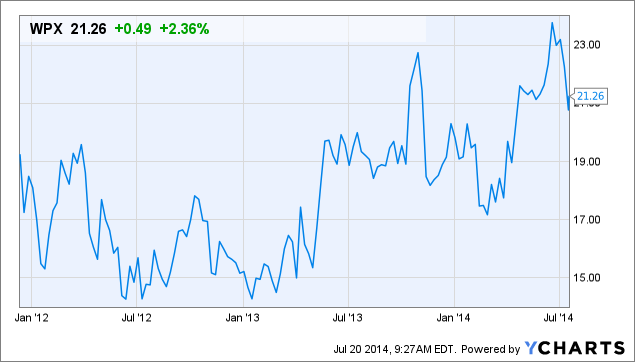 Enterprising Investor – must pass at least 4 of the following 5 tests or be suitable for a defensive investor: Score = 0/5

WPX Energy does not qualify for either the Defensive Investor or the Enterprising Investor. Â In fact, the company received one of the lowest scores out of all companies reviewed by ModernGraham. Â The only requirement of either investor type which the company passes is the Defensive Investor’s market cap size requirement. Â As a result, value investorsÂ following the ModernGraham approach based on Benjamin Graham’s methods should explore other opportunities. Â As for a valuation, the negative EPSmg (normalized earnings) prevents the ModernGraham valuation model from returning a reliable estimate of intrinsic value. Â Therefore, at this time, the value of the company appears to be significantly speculative and will remain so until the company achieves a positive EPSmg.

The next part of the analysis is up to individual investors, and requires discussion of the company’s prospects. Â What do you think? Â What value would you put on WPX Energy Inc. (WPX)? Â Where do you see the company going in the future? Â Is there a company you like better? Â Leave aÂ comment on ourÂ Facebook pageÂ or mentionÂ @ModernGrahamÂ on Twitter to discuss.

Disclaimer: Â The author did not hold a position in WPX Energy (WPX)Â orÂ in any other company mentioned in this article at the time of publication and had no intention of changing that position within the next 72 hours. Â Logo taken from wikipedia for the sole purpose of identifying the company; this article is not affiliated with the company in any manner.