Benjamin Graham taught that Intelligent Investors must do a thorough fundamental analysis of investment opportunities to determine their intrinsic value and inherent risk. Â This isÂ best done by utilizing a systematic approach to analysis that will provide investors with a sense of how a specific company compares to another companyÂ or by reviewing theÂ 5 Undervalued Companies for the Defensive Investor with High Dividend Yields.Â Â By using theÂ ModernGraham methodÂ one can review a company’s historical accomplishments and determine an intrinsic value that can be compared across industries. Â What follows is a specific look at how Kohls Corporation (KSS)Â fares in theÂ ModernGraham valuation model.

Company ProfileÂ (obtained fromÂ Google Finance):Â Kohlâ€™s Corporation (Kohlâ€™s) operate family-oriented department stores that sell apparel, footwear and accessories for women, men and children; soft home products, such as sheets and pillows, and housewares. Kohlâ€™s apparel and home fashions appeal to classic, modern classic and contemporary customers. As of January 28, 2012, the Company operated 1,127 stores in 49 states. In addition, Kohlâ€™s offers on-line shopping on its Website at www.Kohls.com. Originally designed as an added service for customers who prefer to shop using the Internet, the Website include a selection of items and categories beyond what is available in stores, with a primary focus on sizes, product line extensions, and Web-exclusive product lines. Only at Kohlâ€™s is a brand of the Company. In March 2012, the Company opened eight new stores. In March 2013, it announced the openings of nine new stores, bringing the Company’s store count to 1,155 stores. 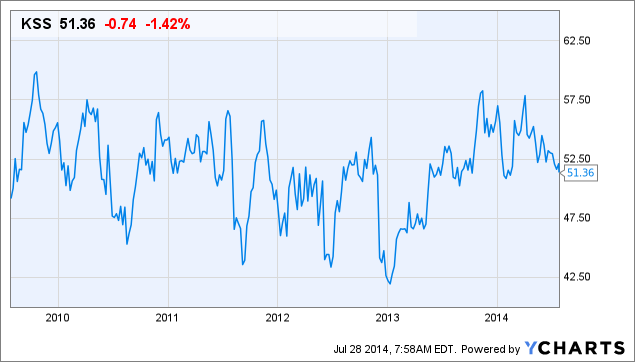 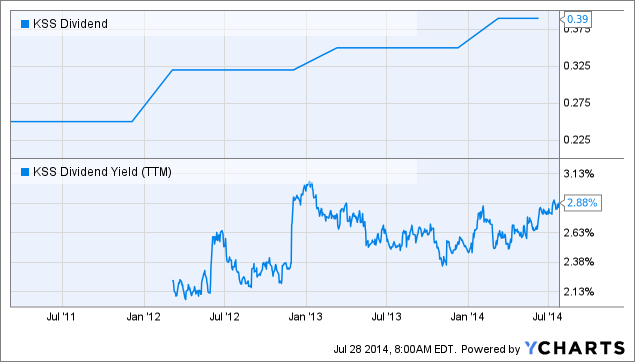 Kohls Cororation is suitable for Enterprising Investors but not for Defensive Investors. Â The Defensive Investor is concerned with the low current ratio and the short dividend history while the Enterprising Investor’s only concern is the high level of debt relative to the net current assets. Â As a result, Enterprising InvestorsÂ following the ModernGraham approach based on Benjamin Graham’s methods should feel comfortable proceeding with further research into the company and comparing it to other opportunities including a review of ModernGraham’s valuation of Macy’s Inc. (M) and ModernGraham’s valuation of Nordstrom (JWN). Â From a valuation side of things, theÂ company appears to be fairlyÂ valued after growing its EPSmg (normalized earnings) from $3.33 in 2011 to an estimated $4.11 for 2015. Â This level of demonstrated growth supportsÂ the market’s implied estimate of 2.00%Â earnings growth and leads the ModernGrahamÂ valuation model, based on Benjamin Graham’s formula, to return an estimate of intrinsic value within a margin of safety relative toÂ the price.

The next part of the analysis is up to individual investors, and requires discussion of the company’s prospects. Â What do you think? Â What value would you put on Kohls Corporation (KSS)? Â Where do you see the company going in the future? Â Is there a company you like better? Â Leave aÂ comment on ourÂ Facebook pageÂ or mentionÂ @ModernGrahamÂ on Twitter to discuss.

Disclaimer: Â The author did not hold a position in Kohls Corporation (KSS)Â orÂ in any other company mentioned in this article at the time of publication and had no intention of changing that position within the next 72 hours. Â Logo taken from wikipedia for the sole purpose of identifying the company; this article is not affiliated with the company in any manner.