In the wake of the great financial crisis it can sometimes be difficult for Intelligent Investors to find a solid financial company in which to invest, because they require specific achievements over the historical period. Â Many investors may simply decide to throw out the worst years with the rationale that they are outliers that shouldn’t be considered when evaluating the company’s prospects, but doing so would involve speculation. Â We don’t know whether the financial crisis will happen again, but we do know that if it does, we can expect to see similar results as we did before. Â By continuing to require the same standards for the historical period, Intelligent Investors are able to whittle down banks to only those with the best financial position, and then they are able to determine an intrinsic value toÂ get a sense of whether the company is a good investment. Â In addition, a company must have strong financial statements to prove that it is stable enough for Intelligent Investors. Â This isÂ best done by utilizing a systematic approach to analysis that will provide investors with a sense of how a specific company compares to another company. Â By using theÂ ModernGraham methodÂ one can review a company’s historical accomplishments and determine an intrinsic value that can be compared across industries. Â What follows is a specific look at how Berkshire Hathaway (BRK.B)Â fares in theÂ ModernGraham valuation model.

Company ProfileÂ (obtained fromÂ Google Finance):Â Berkshire Hathaway Inc. (Berkshire) is a holding company owning subsidiaries engaged in a number of diverse business activities. The Company is engaged in the insurance businesses conducted on both a primary basis and a reinsurance basis, a freight rail transportation business and a group of utility, and energy generation and distribution businesses. Berkshire also owns and operates a number of other businesses engaged in a variety of activities. In October 2012, HomeServices acquired a 66.7% interest in the residential real estate brokerage franchise network in the United States. The Companyâ€™s insurance underwriting operations are consisted of the sub-groups, including GEICO and its subsidiaries, General Re and its subsidiaries, Berkshire Hathaway Reinsurance Group and Berkshire Hathaway Primary Group. In July 2014, Berkshire Hathaway Inc acquired WPLG-TV10, a Pembroke Park-based owner and operator of a TV station. 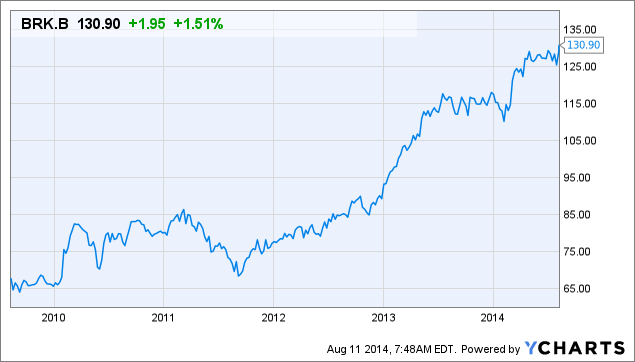 Berkshire Hathaway does not qualify for either the Defensive Investor or the Enterprising Investor because it does not pay dividends. Â The company passes all of the remaining requirements of each investor type. Â Warren Buffett has stated many times that the lack of dividend payments is because he believes he can achieve a higher rate of return than his individual investors; however, dividends remain an essential part of value investing. Â As a result,Â value investorsÂ following the ModernGraham approach based on Benjamin Graham’s methods should explore other opportunities. Â From a valuation side of things, theÂ company appears fairlyÂ valued after growing its EPSmg (normalized earnings) from $4.40 in 2010 to only an estimated $6.61 for 2014. Â This level of demonstrated growth supportsÂ the market’s implied estimate of 5.65% earnings growth and leads theÂ ModernGraham valuation model, which is based on Benjamin Graham’s formula, to return an estimate of intrinsic value within a margin of safety relative toÂ the market price.

The next part of the analysis is up to individual investors, and requires discussion of the company’s prospects. Â What do you think? Â What value would you put on Berkshire Hathaway (BRK.B)? Â Where do you see the company going in the future? Â Is there a company you like better? Â Leave a comment on ourÂ Facebook pageÂ or mentionÂ @ModernGrahamÂ on Twitter to discuss.

Disclaimer: Â The author held a longÂ position in Berkshire Hathaway (BRK.B) but did not hold a position in any of the other companies listed in this article at the time of publication and had no intention of changing that position within the next 72 hours. Â Logo taken from the Wikipedia; this article is not affiliated with the company in any manner.