Benjamin Graham taught that Intelligent Investors must do a thorough fundamental analysis of investment opportunities to determine their intrinsic value and inherent risk. Â This isÂ best done by utilizing a systematic approach to analysis that will provide investors with a sense of how a specific company compares to another companyÂ or by reviewing theÂ 5 Undervalued Companies for the Defensive Investor.Â  By using theÂ ModernGraham methodÂ one can review a company’s historical accomplishments and determine an intrinsic value that can be compared across industries. Â What follows is a specific look at how Range Resources Corp (RRC)Â fares in theÂ ModernGraham valuation model.

Company ProfileÂ (obtained fromÂ Google Finance):Â Range Resources Corporation (Range) is an independent natural gas, natural gas liquids and oil company, engaged in the exploration, development and acquisition of natural gas and oil properties, mostly in the Appalachian and Southwestern regions of the United States. Range operates in two regions: the Appalachian (which includes shale tight gas, coal bed methane and conventional natural gas, natural gas liquids, condensate and oil production in Pennsylvania, Virginia, and West Virginia), and Southwestern (which includes the Permian Basin of West Texas and the Delaware Basin of New Mexico, the Texas Panhandle, the Ardmore Basin in Southern Oklahoma, the Nemaha Uplift in Northern Oklahoma and the Anadarko Basin of Western Oklahoma). As of Decmbeer 31, 2011, the Company has approximately 8,600 proven and unproven drilling locations in inventory. During the year ended December 31, 2011, the Company discontinued its Barnett Shale assets that were sold in April 2011. 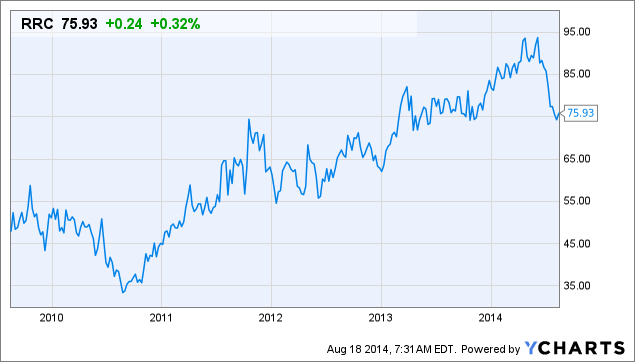 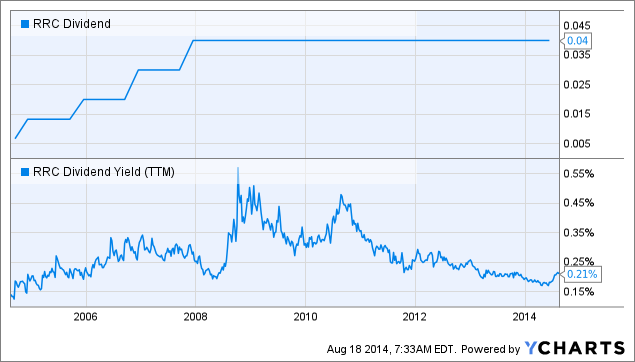 Range Resources Corporation is not suitable for either the Defensive Investor or the Enterprising Investor. Â The only Defensive Investor requirements the company satisfies are the market cap size and the dividend history. Â Likewise, the only Enterprising Investor requirements the company passes are the dividend payment and the earnings growth over the last five years. Â As a result, value investorsÂ following the ModernGraham approach based on Benjamin Graham’s methods should explore other opportunities at this time. Â From a valuation standpoint, the company appears overvaluedÂ after growing its EPSmg (normalized earnings) from $0.08 in 2010 to an estimated $0.65 for 2014. Â This level of demonstrated growth falls short ofÂ the market’s extremely high implied estimate of 53.98%Â earnings growth and leads the ModernGrahamÂ valuation model, based on Benjamin Graham’s formula, to return an estimate of intrinsic value well belowÂ the price.

The next part of the analysis is up to individual investors, and requires discussion of the company’s prospects. Â What do you think? Â What value would you put on Range Resources Corporation (RRC)? Â Where do you see the company going in the future? Â Is there a company you like better? Â Leave aÂ comment on ourÂ Facebook pageÂ or mentionÂ @ModernGrahamÂ on Twitter to discuss.

Disclaimer: Â The author did not hold a position in Range Resources Corporation (RRC)Â orÂ in any other company mentioned in this article at the time of publication and had no intention of changing that position within the next 72 hours. Â Logo taken from Wikipedia for the sole purpose of identifying the company; this article is not affiliated with the company in any manner.