In the wake of the great financial crisis it can sometimes be difficult for Intelligent Investors to find a solid financial company in which to invest, because they require specific achievements over the historical period. Â Many investors may simply decide to throw out the worst years with the rationale that they are outliers that shouldn’t be considered when evaluating the company’s prospects, but doing so would involve speculation. Â We don’t know whether the financial crisis will happen again, but we do know that if it does, we can expect to see similar results as we did before. Â By continuing to require the same standards for the historical period, Intelligent Investors are able to whittle down banks to only those with the best financial position, and then they are able to determine an intrinsic value toÂ get a sense of whether the company is a good investment. Â In addition, a company must have strong financial statements to prove that it is stable enough for Intelligent Investors. Â This isÂ best done by utilizing a systematic approach to analysis that will provide investors with a sense of how a specific company compares to another company. Â By using theÂ ModernGraham methodÂ one can review a company’s historical accomplishments and determine an intrinsic value that can be compared across industries. Â What follows is a specific look at how Fifth Third Bancorp (FITB)Â fares in theÂ ModernGraham valuation model. 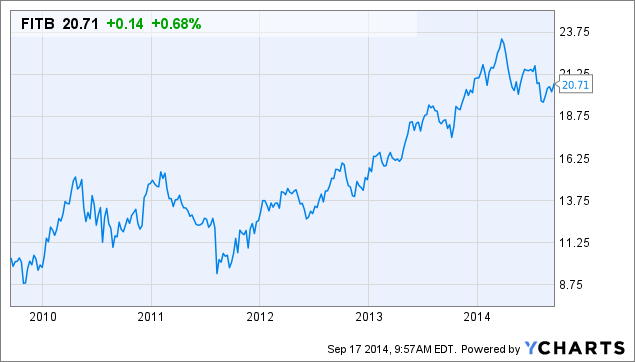 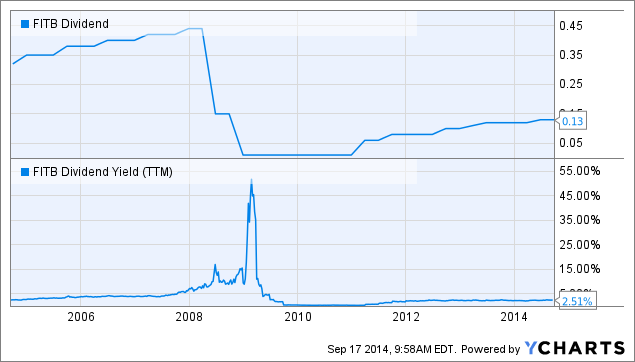 Fifth Third Bancorp qualifies for the Enterprising Investor but not the Defensive Investor. Â The Defensive Investor is concerned by the lack of earnings stability or growth over the last ten years while the company passes all of the Enterprising Investor’s requirements. Â As a result, Enterprising InvestorsÂ following the ModernGraham approach based on Benjamin Graham’s methods should feel comfortable proceeding with further research into the company and comparing it to other opportunities. Â As for a valuation,Â theÂ company appears undervalued after growing its EPSmg (normalized earnings) from $0.02 in 2010 to an estimated $1.61 for 2014. Â This level of demonstrated growth outpacesÂ the market’s implied estimate of 2.16% earnings growth and leads theÂ ModernGraham valuation model, which is based on Benjamin Graham’s formula, to return an estimate of intrinsic value aboveÂ the market price.

Be sure to check out the previous ModernGraham valuations of Fifth Third Bancorp (FITB)Â for more perspective!

The next part of the analysis is up to individual investors, and requires discussion of the company’s prospects. Â What do you think? Â What value would you put on Fifth Third Bancorp (FITB)? Â Where do you see the company going in the future? Â Is there a company you like better? Â Leave a comment on ourÂ Facebook pageÂ or mentionÂ @ModernGrahamÂ on Twitter to discuss.

Disclaimer: Â The author did not hold aÂ position in Fifth Third Bancorp (FITB)Â orÂ in any of the other companies listed in this article at the time of publication and had no intention of changing that position within the next 72 hours. Â Logo taken from the Wikipedia; this article is not affiliated with the company in any manner.