Western Digital appears to be a solid opportunity for purchasing a great company at a good price. The Defensive Investor has few concerns, and in fact is only disappointed by the company’s short dividend history. The Enterprising Investor is likewise situated, and has no initial concerns. Over the last ten years, the company has seen its EPS grow from an average of $1.72 to an average of $5.75, indicating a high level of long-term growth that pleases the Defensive Investor.

Overall, the company is rated as fairly valued by the ModernGraham model, which looks primarily at the company’s growth in EPSmg (normalized earnings). EPSmg has gone from $3.75 in 2010 to $5.41 for 2014, leading to an average growth of nearly 8.9% each year. The valuation model utilizes a built-in safety margin by reducing that growth rate to 6.65% in order to forecast growth over the next 7-10 years, and that rate is above the market’s current forecast of only 4.67%. Based on the ModernGraham forecast for growth, the model returns an estimate of intrinsic value of $117.92, which falls within a margin of safety relative to the current price of around $96.50. Value investors are therefore encouraged to proceed with further research to determine whether Western Digital is suitable for their own individual portfolios. 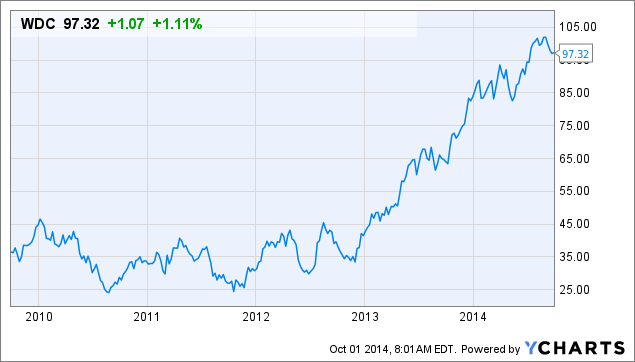