Benjamin Graham taught that Intelligent Investors must do a thorough fundamental analysis of investment opportunities to determine their intrinsic value and inherent risk. Â This isÂ best done by utilizing a systematic approach to analysis that will provide investors with a sense of how a specific company compares to another companyÂ or by reviewing theÂ 5 Highest Dividend Yields Among Undervalued Companies for the Defensive Investor – September 2014.Â  By using theÂ ModernGraham methodÂ one can review a company’s historical accomplishments and determine an intrinsic value that can be compared across industries. Â What follows is a specific look at how The Hershey Company (HSY)Â fares in theÂ ModernGraham valuation model.

Company ProfileÂ (obtained fromÂ Google Finance):Â The Hershey Company is a producer of chocolate in North America and a provider in chocolate and sugar confectionery. The Companyâ€™s principal product groups include chocolate and sugar confectionery products; pantry items, such as baking ingredients, toppings and beverages, and gum and mint refreshment products. It manufactures, markets, sells and distributes its products under more than 80 brand names. The Company markets its products in approximately 70 countries worldwide. The Company operates in United States, the Americas, and Asia, Europe, the Middle East and Africa (AEMEA). The Companyâ€™s key regions include the United States; the Americas, including Canada, Mexico, Brazil, Central America, Puerto Rico and global exports and AEMEA, including Asia, Europe, the Middle East, Africa and exports to these geographical areas In January 2012, the Company acquired Brookside Foods Ltd. (Brookside). 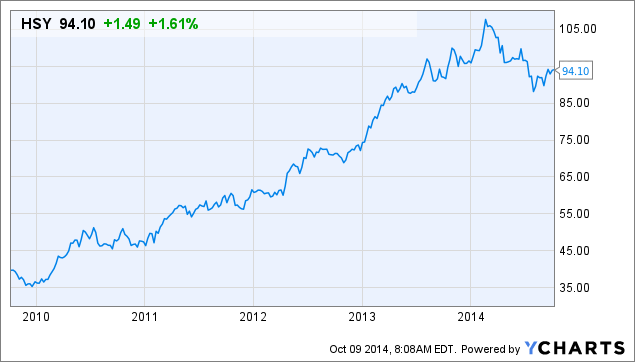 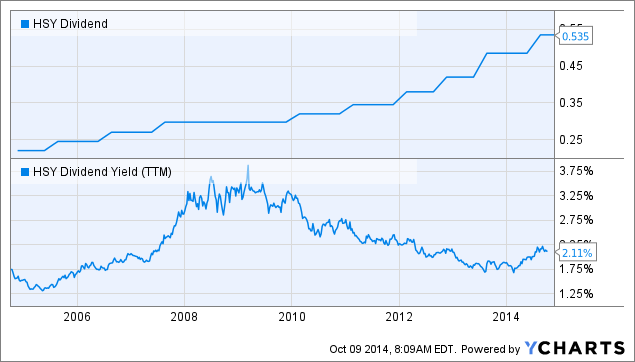 The Hershey CompanyÂ is suitableÂ for the Enterprising Investor but not the Defensive Investor. Â The Defensive Investor has concerns with the low current ratio, and the high PEmg and PB ratios.Â Â The Enterprising Investor’s only initial concern is the level of debt relative to the net current assets. Â As a result, Enterprising Investors following the ModernGraham approach based on Benjamin Graham’s methods should feel comfortable proceeding with research into the company and comparing it to other opportunities. As for a valuation,Â the company appears to be fairlyÂ valued after growingÂ its EPSmg (normalized earnings) from $2.24 in 2010 to an estimated $3.55 for 2014. Â This level of demonstrated growth supportsÂ the market’s implied estimate of 8.99%Â earnings growth and leads the ModernGrahamÂ valuation model, based on Benjamin Graham’s formula, to return an estimate of intrinsic value within a margin of safety relative toÂ the price.

The next part of the analysis is up to individual investors, and requires discussion of the company’s prospects. Â What do you think? Â What value would you put on The Hershey Company (HSY)? Â Where do you see the company going in the future? Â Is there a company you like better? Â Leave aÂ comment on ourÂ Facebook pageÂ or mentionÂ @ModernGrahamÂ on Twitter to discuss.

Disclaimer: Â The author did not hold a position in The Hershey Company (HSY)Â orÂ in any other company mentioned in this article at the time of publication and had no intention of changing that position within the next 72 hours. Â Logo taken from Wikipedia for the sole purpose of identifying the company; this article is not affiliated with the company in any manner.