Goldman Sachs does not perform well in the initial stages of the ModernGraham analysis, having not met the requirements of either the Defensive Investor or the Enterprising Investor. Specifically, the Defensive Investor is turned away by the lack of earnings growth over the last ten years and the Enterprising Investor is similarly concerned by the lack of growth over the last five years. As a result, any value investor following the ModernGraham approach based on Benjamin Graham’s teachings should explore other opportunities at this time or proceed with extreme caution when continuing to review this company.

To determine an estimate of the intrinsic value, one must consider the company’s earnings. Goldman Sachs has seen its EPSmg (normalized earnings) drop from $15.80 in 2010 to an estimated $4.00 for 2014. This drop in earnings is approximately a loss of 2.28% each year. Even assuming the company’s drop in earnings will be lessened in the future, a conservative growth estimate may be around a loss of 1.7% annually, which clearly does not support the market’s implied forecast of 2.58% earnings growth over the next 7-10 years. As a result, the ModernGraham valuation model returns an estimate of intrinsic value below the price, supporting a conclusion that the company is overvalued.

Be sure to check out previous ModernGraham valuations of Goldman Sachs for better perspective. 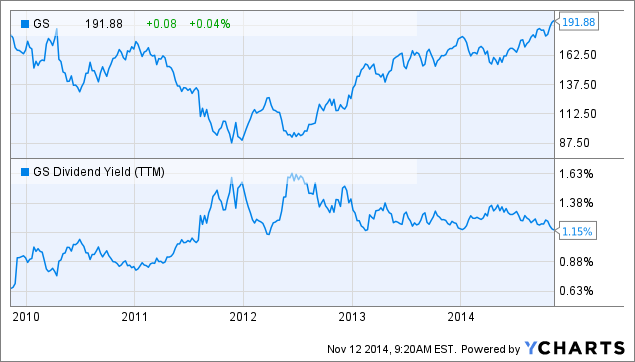