SunTrust does not come out well in the initial stages of the analysis, as it does not qualify for either the Defensive Investor or the Enterprising Investor. The Defensive Investor is concerned by the lack of earnings stability during the last ten years, along with the lack of earnings growth over the last ten years. The Enterprising Investor is concerned with the lack of earnings stability over the last five years. As a result, any value investor following the ModernGraham approach based on Benjamin Graham’s teachings should explore other opportunities at this time such as Wells Fargo and Company (NYSE:WFC).

To determine an estimate of the intrinsic value, one must consider the company’s earnings. SunTrust Banks has grown its EPSmg (normalized earnings) from $0.30 in 2010 to an estimated $2.57 for 2014. This is a high level of growth, which is well above the market’s implied forecast of only 3.5% earnings growth over the next 7-10 years. The company would have to see a significant slowdown in growth in order to be valued at the market’s current price. As a result, the ModernGraham valuation model returns an estimate of intrinsic value well above the price, supporting a clear conclusion that the company is significantly undervalued. All speculators are therefore encouraged to proceed with further research to determine whether SunTrust Banks is suitable for their own individual portfolios. 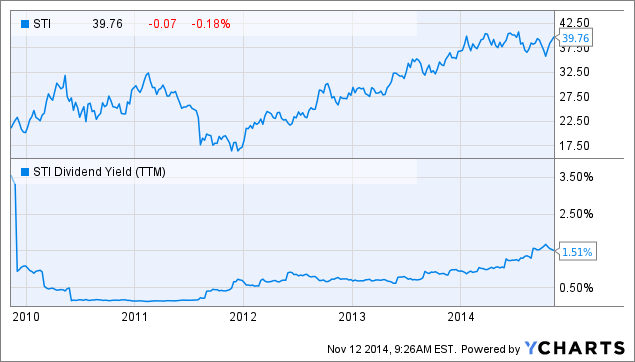 Disclaimer: Â The author did not hold a positionÂ in SunTrust Banks (STI)Â orÂ in any other company mentioned in this article at the time of publication and had no intention of changing that position within the next 72 hours. Â Logo taken from Wikipedia for the sole purpose of identifying the company; this article is not affiliated with the company in any manner.