After reviewing the data, it is clear that conservative value investors may wish to seek other opportunities. The Defensive Investor has numerous concerns, including the low current ratio, the lack of earnings stability or growth, and high PEmg and PB ratios while the Enterprising Investor has concerns with the low current ratio, as well as the lack of earnings growth or stability over the last five years. As a result, both investor types would find the company to be too risky to proceed. That said, any investors willing to speculate about the future of the company may go ahead with the next step of the analysis, which is a determination of the company’s intrinsic value.

When calculating an estimate of intrinsic value, it is important to consider the historical earnings results along with the market’s implied estimate for future growth. Here, the company has seen its EPSmg (normalized earnings) drop from $6.13 in 2010 to only an estimated $5.52 for 2014. This lack of demonstrated growth is in stark contrast to the market’s implied estimate of 8.93%. There would have to be a shift in the company’s growth in order to be worth the current market pricing. As a result, the company appears to be significantly overvalued at the present time.

Be sure to check out previous ModernGraham valuations of General Dynamics Corporation for better perspective! 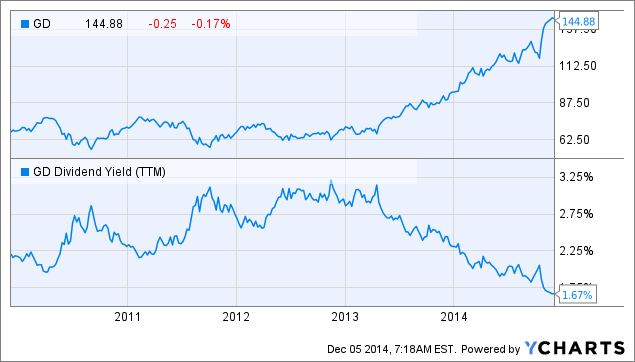 Disclaimer: Â The author did not hold aÂ position in General Dynamics (GD)Â orÂ in any other company mentioned in this article at the time of publication and had no intention of changing that position within the next 72 hours. Â Logo taken from Wikipedia for the sole purpose of identifying the company; this article is not affiliated with the company in any manner.