Analog Devices (ADI) has seen a significant price rise in the last few months, greatly outpacing the market. Such a rise will intrigue some speculators and technical analysts who think that a price run up can be indicative of a good company. After all, far too often individuals believe that if a company rises in price, it will continue to rise. In addition, Analog Devicesbeat earnings forecasts in its most recent quarter, which according to CEO Vincent Roche is a result of “focusing on the right markets and products.”

However, Benjamin Graham, the father of value investing, taught that the most important aspect to consider is whether the company is trading at a discount relative to its intrinsic value. It is through a thorough fundamental analysis that the investor is able to make a determination about a potential investment’s merits. 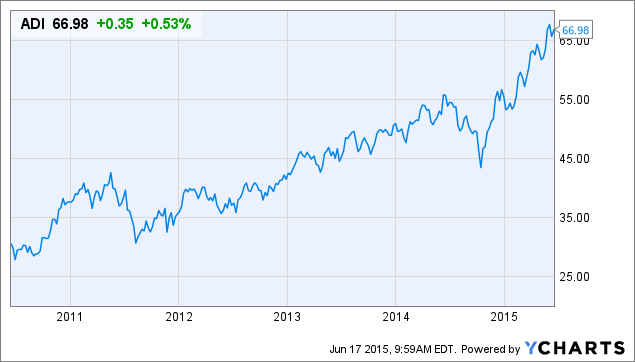 Enterprising Investor – Must pass at least 4 of the following 5 tests or be suitable for a Defensive Investor: Score = 5/5 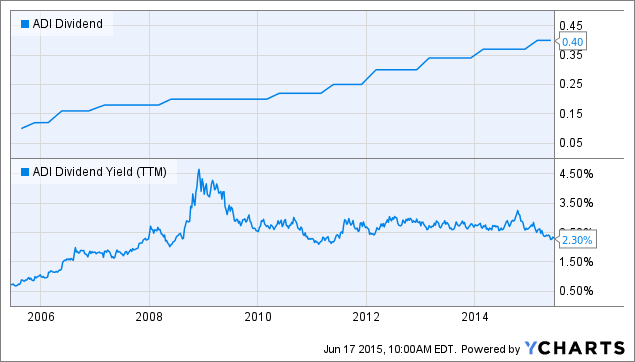 Analog Devices is not very attractive when compared to some of its competitors. For example, a ModernGraham valuation of Seagate Technology(NASDAQ:STX) indicates that company is significantly undervalued and suitable for Enterprising Investors. Western Digital (NASDAQ:WDC) fares even better, and is both undervalued and suitable for the more conservative Defensive Investor in its most recent ModernGraham valuation.

When it comes to that valuation, it is critical to consider the company’s earnings history. In this case, it has grown its EPSmg (normalized earnings) from $2.18 in 2011 to only an estimated $2.32 for 2015. This level of demonstrated growth does not support the market’s implied estimate for annual earnings growth of 10.19% over the next 7-10 years.

In recent years, the company’s actual growth in EPSmg has averaged around 1.25% annually, so the market is expecting a significant bump in earnings growth. The ModernGraham valuation model uses a much more conservative figure when making an estimate, and returns an estimate of intrinsic value well below the current price, indicating that Analog Devices is overvalued at the present time.