Express Scripts (ESRX) has several traits which may attract investors, including consistent earnings growth over the last few years. In addition, many qualitative factors make the company interesting to numerous investors. For example, Seeking Alpha contributor Insider Monkey recently wrote regarding the effect industry consolidation may have on the company’s margins. This is a great qualitative issue to consider, but one must first look at a quantitative analysis of the company.

In fact, Benjamin Graham, the father of value investing, taught that the most important aspect to consider is whether the company is trading at a discount relative to its intrinsic value. It is through a thorough fundamental analysis that the investor is able to determine a potential investment’s merits. Here’s an updated look at how the company fares in the ModernGraham valuation model.

This model is inspired by the teachings of Benjamin Graham and considers numerous metrics intended to help the investor reduce risk levels. The first part of the analysis is to determine whether the company is suitable for the very conservative Defensive Investor or the less conservative Enterprising Investor who is willing to spend a greater amount of time conducting further research.

In addition, Graham strongly suggested that investors avoid speculation in order to remove the subjective elements of emotion. This is best achieved by utilizing a systematic approach to analysis that will provide investors with a sense of how a specific company compares to another. By using theModernGraham method, one can review a company’s historical accomplishments and determine an intrinsic value that can be compared across industries. 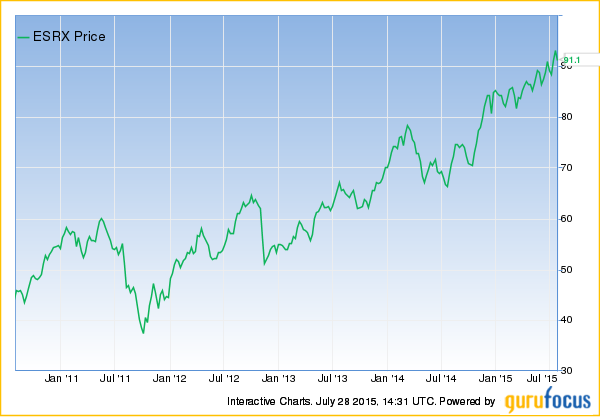 Defensive Investor – Must pass at least 6 of the following 7 tests: Score = 3/7

Enterprising Investor – Must pass at least 4 of the following 5 tests to be suitable for a Defensive Investor: Score = 2/5

Express Scripts does not pay a dividend. 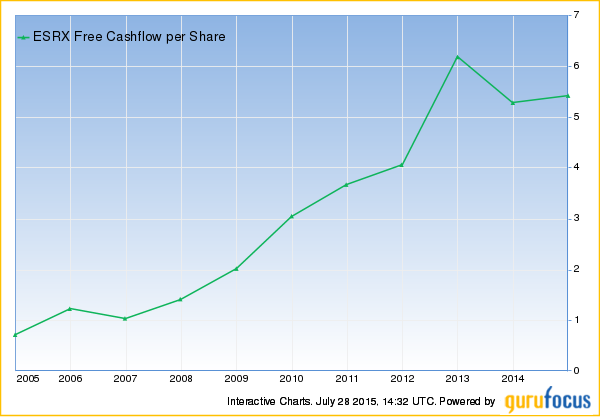 Express Scripts does not qualify for either the Enterprising Investor or the more conservative Defensive Investor. The Defensive Investor is concerned by the low current ratio, lack of dividends, and the high PEmg and PB ratios, while the Enterprising Investor is concerned with the level of debt relative to the current assets and the lack of dividends. Therefore, all value investors should only proceed with the next stage of the analysis, which is a determination of an estimate of intrinsic value, with a speculative attitude in mind.

From a valuation side of things, the company has grown its EPSmg (normalized earnings) from $2.01 in 2012 to an estimated $3.35 for 2016. This level of demonstrated growth supports the market’s implied estimate for earnings growth of 9.32% over the next 7-10 years.

The company’s recent earnings history shows an average annual growth in EPSmg of around 13.32%; however, the ModernGraham valuation model reduces such a rate to a more conservative figure, assuming some slowdown will occur. Even so, the model returns an estimate of intrinsic value falling within a margin of safety relative to the current price, indicating Express Scripts is fairly valued at the present time.